My name is Darrel and I am the product manager for Flexstore Systems, for a company called SCM Australia. We’re a national company, we sell woodworking machinery and also aluminium machinery.

We were in a unique situation where we were looking at relocating our factory and we needed to look at making our production more efficient, and we realised that introducing a secondary nesting machine was just going to probably complicate our logistics situation even further. Once Darrel highlighted the benefits of the automated cell between the flexstore and the Morbidelli router, we started doing some costings and estimates on the time saving and flexibility that the system would give us and we realised it was really worth looking at.

Once we realised the Flexstore would allow the CNC to be running continuously between colour changes, you start sort of doing the sums on the benefits of that and how we can increase the production every day and the thought of a second router became obsolete.

With our nesting machine it’s a Universal 36 x 18 machine, it has a 26-drill drill head on it and also a 30-tool tool changer on it. It’s been set up to produce work for these guys, exactly what they want to do, it’s a custom-made system and we can do that for any manufacturer.

After the Universal we have the Cyflex drilling machine which is a twin head machine with 2 massive drilling spindles on it. It is able to face drill and horizontal drill, it can eject the part out the back as a flowthrough or back to the operator. You can have 50 or 100 different size panels and introduce them one after another and the machine will machine them depending on what the program is and what it reads from the barcode.

Because it is relatively new technology for the SCM Group into Australia, not the system itself but the implementation of the system into the Australian way of manufacturing, I think we noticed there was quite a few differences to I guess the typical European way. I think with the Europeans they tend to use Beam saws rather than nesting machines, so for Australia it was always going to be fitted to a nesting machine and that’s what we had to get right, we had to basically Australianise the system so that it could handle nesting. 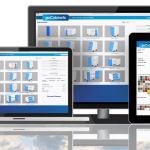 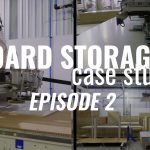